You Are Here Dreams 1-2-3 » Interpret Dreams » Zombies! What It Means to Dream about Zombies

Zombies! What It Means to Dream about Zombies 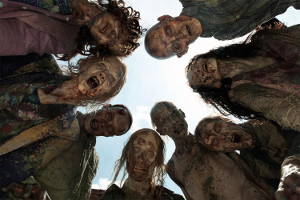 Dreaming about zombies, the living dead

One of the primary ways zombies are used in dreams is to symbolize mindlessness. Being surrounded by zombies in a dream can symbolize the feeling of being surrounded by stupidity. Your world is full of the walking dead. People are driven by the most primitive of instincts. Your opinion of people and society are very low. It’s an easy connection to make, bearing in mind that the comparison with zombies is an exaggeration.

Extend the idea to situations where a person can’t think of what to say or freezes with panic. A blank expression on someone’s face is comparable in an exaggerated way to a zombie’s blank expression.

Extend the idea further to situations where you are bored out of your mind. Conversations are tedious. Silence is deafening.

A zombie can symbolize something that won’t die, such as a bad habit or negative attachment. It can symbolize a change that isn’t completed.

Zombies are awesome symbols for feeling sluggish and lifeless. Energy level is low. You have no inspiration. “The walking dead.”

Zombie often goes hand in hand with “apocalypse.” That’s a conversation for another time.

A zombie is dead but still alive, and that association can be used to describe a situation such as hoping to get back together with an ex. The relationship is dead but your hope for it is alive.

4 thoughts on “Zombies! What It Means to Dream about Zombies”