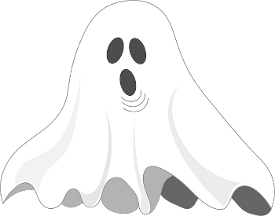 Ghost Dreams: How to Interpret the Meaning of Ghosts in a Dream

With Halloween right around the corner, let’s explore related dream symbols. Today, we look at the symbolism of ghosts.

A ghost in a dream can be a reference to the past, because ghosts are perceived as relics from the past. Like memories and feelings, ghosts can linger. They won’t go away until dealt with.

Ghosts haunt, and people can be haunted, for example, by guilt and regret. Someone who is “seeing ghosts” is haunted by the past, usually associated with misdeeds and guilty conscience.

Ghosts can symbolize fear, since they are commonly feared. Usually the symbolism is tied to associations specific to ghosts, such as fear of death or fear of the past catching up with you. But ghosts can symbolize any fear, or paranoia—a strong possibility considering the amorphous nature of ghosts and paranoia. However, a friendly ghost is not likely to symbolize fear. You can tell by how you feel about or react to the ghost.

A ghost in a dream can refer to someone who isn’t around anymore. For example, after the death of a loved one, especially one you lived with, you can dream about a ghost to symbolize the feeling that the person is still around. You feel their presence. The same idea applies to someone who left, such as after a breakup or divorce or just a long time apart.

Ghosts are associated with death, and in dreams they can refer to someone who has passed away, or to a brush with death. See: Death.

A ghost can refer to being overlooked or ignored. If you “feel like a ghost,” it means nobody is giving you attention or recognition.

As with all dream symbolism, the meaning is found in the context. For example, a ghost in a place you used to live can symbolize something from your past. A ghost haunting the bedroom of a sibling who ran away from home and hasn’t been heard from in a long time can symbolize the sibling or the situation. The person is thought about or remembered but is absent physically. A sad ghost can connect with the feeling of being ignored or overlooked, or something from the past that makes you sad.

Going further, a ghost can symbolize the influence of someone who is not physically present. For example, long after leaving home you can still feel the presence of a parent or other influential figure in your life. In which case, the dream is likely to include references to that person and actions such as doors opening and closing on their own.

Ghosts are used in the sense of “ghost of your former self.” It means loss of energy, prestige, status or influence.

Ghosts are known as “lost souls,” and that can symbolize someone who has no direction in life or no close relations.

For more ideas, see the dream I helped to analyze: Ghosts of Illness Past.