What Do Dreams about Black-Eyed People Mean – Interpreting Nightmares 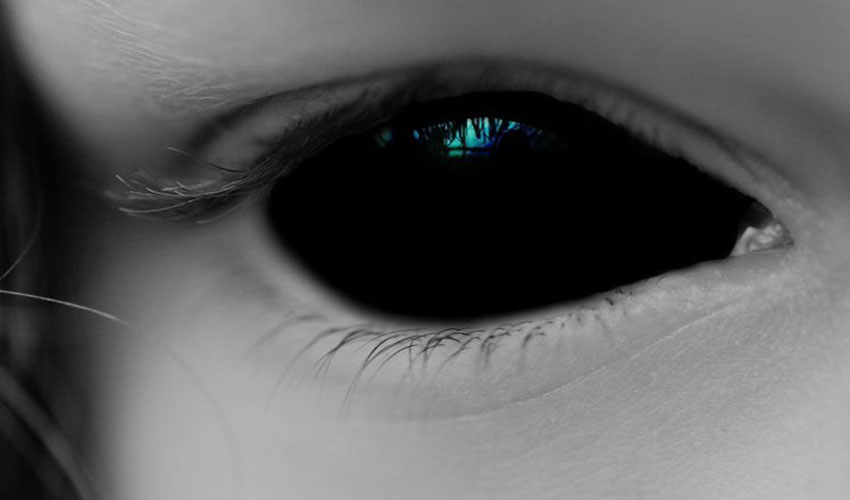 [Excerpted from my forthcoming book from Visible Ink Press: Nightmares: How to Interpret Dark Dreams. Available later this year. Join the mailing list to be notified.]

Black-Eyed People: Here we have a type of monster that appears in nightmares more often than most others and is easily misunderstood as encounters with actual beings. The experience feels so real, it’s natural to think something supernatural has visited you in your sleep. Plus, black-eyed people look like people, and stay with me here, you can be reasonably sure that monsters aren’t real, but something that looks like a person is easily confused with ordinary reality.

But black-eyed people are dream characters and treated the same basic way as all others. They are thought of as walking, talking symbols. The black eyes are part of the symbolism of the character, and they hint at the answer to the first question you should ask about any dream character: what do I see about myself in it? Eyes are said to be the windows to the soul, showing what’s inside a person. If a dream character has black eyes, there’s not much to see. It’s not to say there’s nothing inside you; instead, it suggests something unknown.

The psychology of the subject is deep, but in a nutshell, while dreaming you interact with emerging contents of the unconscious mind. By nature, it’s new to the ego — the “you” in the dream space. You are seeing what’s new in yourself, and because it’s new it’s mysterious and unknown consciously. But it arises from the unconscious mind, which knows everything about you. The unconscious creates not only your dream content but plays a co-creative role with the ego in creating the personality, the person — you — and when it wants you to see something new about yourself it creates a human-like dream character. The unconscious then may add other features to symbolically show you something about yourself that it knows but your ego doesn’t.

Black eyes are the #1 way that dreams say symbolically “you can’t see this part of yourself… yet.” We use our eyes to see, and in dream-speak, to “see” means “to be aware of,” to know, to comprehend. Like when you say, “ah ha, I see it now!” you mean that you get it. You comprehend. Before, you were “in the dark (black),” and now you’re not.

Other possibilities for meaning branch off from that main idea. Black eyes can symbolize what you don’t know about yourself, and what you don’t want to know — it’s repressed or suppressed. Black eyes can mean anything that’s new, unknown, and mysterious. A subject of study is new to you, and you dream about a teacher of that subject with black eyes. You try to get to know a mysterious person and dream about a character with black eyes. You avoid looking at yourself in the mirror because you don’t want to know who is really there, then dream that your eyes are black and inhuman.

It’s a metaphor for feeling dead inside and living mindlessly.

Black eyes can symbolize sadness, grief, and loss. They can symbolize dark emotions, or no emotions. An example is given by the dream a college student experienced after a long bout with depression. In the dream she wakes up in her dorm room, gets ready, leaves to go to class and sees crowds of people walking around emotionlessly. She goes over to talk with someone she knows and suddenly everyone stares at her with completely black eyes. Terrified, she runs back to her room and sees in the mirror that she too has black eyes. She then opens her computer and it has a black screen and in its reflection she sees somebody standing right behind her. She then wakes up for real, screaming.

To analyze the dream, begin with the guideline that dream characters are like actors playing roles and those roles express ideas about you, the dreamer. Her public life is the idea her dream symbolizes as the crowds of people, and their emotionless behavior dramatizes how she feels, especially while in public and trying to interact socially. She’s depressed and can’t connect emotionally.

The black eyes are a metaphor for her depression and lack of social connection, and she’s seeing it reflected by the actors in the story. She feels that way even with familiar people, shown in the dream as wanting to talk with someone she knows and everyone’s eyes turning black. She flees to her dorm room and the depression follows her there. It’s in her eyes, too — she sees it reflected in the mirror and the computer screen. That scene is a play on the idea in the phrase “bring my troubles home with me.” A bad depression is like a dark presence following you everywhere — there’s no escaping it — and the dream paints a picture of what her daily life is like by simulating an ordinary day of waking up in the place where she lives and getting ready for class. The dream is a wake-up call. It’s time to deal with her depression.

In dream-speak, the color black can mean hated, sinister, diabolical, evil, and malevolent. It can symbolize possession by dark thoughts, feelings, ideas, and moods, as if the person is taken over by a dark force. We can tell when something isn’t right about a person by the look in their eyes, and dreams can use black eyes to indicate feelings and perceptions not just about people but also situations and circumstances when something feels dark or black about them.

Eyes turning black express the idea of an outside force taking over from within. For example, in a nightmare, the eyes of a group of people turn black after they look at a black-eyed little girl on an altar, then the same thing happens to the dreamer’s family when they look into the eyes of the group members. People begin behaving like monsters, cannibalizing themselves and each other. Then someone starts reading from a Bible, and a group of people try to perform an exorcism on a second young girl.

The girl on the altar symbolizes a religious ideology that appears innocent but its influence is sinister. It gets into people’s minds, takes over their beliefs and personalities, and spreads from person to person. The dream expresses that idea in the symbolism of eyes turning black after looking into the eyes of other black-eyed people. And now the dreamer is seeing it possess her family members who are under the influence of the ideology. The dream scripts their behavior to act like monsters as an exaggerated but truthful depiction of the ideology. It’s diabolical. It eats people from within — that’s what the dream means by cannibalism.

The exorcism scene symbolically enacts the dreamer’s struggle against the ideology and its influence on her family. She wishes to be free of it. Exorcism frees a person from a sinister spiritual force, and her dream uses the symbolism of it to imply the idea of possession. In dream-speak, possession means anything that exerts an invisible or magnetic hold on people, such as ideologies and beliefs.

Nothing says “fear” or worse like black eyes — especially fear of serious illness and death. Black eyes have long been associated with disease and death.

Dreams use the symbolism to express urgency — it says, “you need to see this; it’s important.”

Dreams can use black eyes to indicate issues related to sleep apnea, sleep paralysis, and sleep deprivation — when a person isn’t sleeping well, it shows in their eyes. Something’s not right physically or mentally; it’s out of kilter. People who experience chronic sleep deprivation are known to have more frequent episodes of sleep paralysis where they see people and other creatures with black eyes, oftentimes with a creepy or evil vibe. Black eyes in a dream can mean they’re figuratively asleep on their feet — or literally, they dream while awake (called “REM intrusion”) and it’s terrifying.

Black-eyed people in dreams can symbolize the idea of seeing through something, especially something illusory or misunderstood. For example, a man dreams that people he knows have black eyes, and when he looks closer, he sees the eyes turn white and senses something isn’t right. Instead of reacting fearfully, he is sympathetic and wants to help. Other people don’t notice the ones with black eyes. The dream reflects the dreamer’s sense that he can help people who appear out of reach emotionally, socially, and psychologically, and he is drawn to those who are overlooked and shunned.

Finally, dreams can create visual puns and other sorts of imagery that play with words and mix ideas. It opens the possibility that black eyes symbolize an injury to the eye, or the figurative meaning of getting a black eye, meaning a blow to one’s image, pride, esteem, or reputation.

See them all at Amazon