You Are Here Dreams 1-2-3 » Interpret Dreams » Dinosaur dreams: How to interpret the meaning of dinosaur dreams 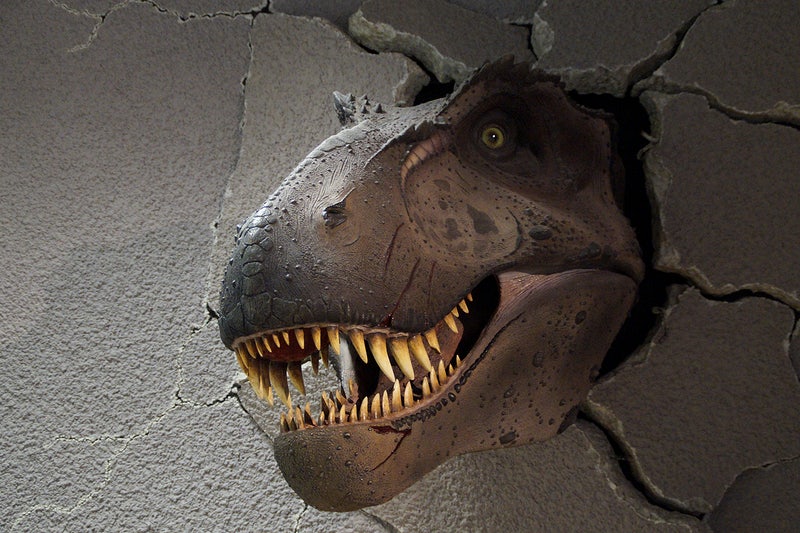 Picture the ginormous dinosaur bearing down on you. You run away but it’s faster. Hide and it will find you. Fight it and see how that turns out.

Now think like the storyteller that chooses the characters in our dreams. Why is a dinosaur right for the role? Well, if the story is about something that’s huge and bearing down on you, that you can’t outrun, escape, or fight, then a dinosaur is a great symbol for it. The storyteller has other options but for some reason the dinosaur is the best fit for the role. Why? That’s the question you ask when you interpret the dream.

The dinosaur could be a good fit because it’s primitive and something about a situation or condition feels primitive. For example, the electricity is out and you joke that you’re living like a caveman while dealing with a big problem. The dinosaur is big and primitive and associated with caveman times, and just one look at it gets across the ideas. It’s also obstinate, immovable, implacable, loud, dominating, dangerous, and fearsome, and as a dream symbol, it embodies those ideas, too. Which ones do your dream use? It’s not always easy to tell, but if you use my DREAMS 1-2-3 process you can at least get started.

Some dinosaurs are relatively small compared to a behemoth like a T-Rex, but the approach to interpreting them as symbols is the same. What makes a small dinosaur better for certain roles? Take for instance the scenario where the power is out. It’s a big problem that spawns smaller problems. The dream chooses to tell the story as numerous small dinosaurs that plague your home, using them as symbols that match the situation’s dynamics. That way, the dream imagery matches the situation.

The psychology behind the dinosaur as a symbol begins with it being a reptilian creature. First, reptiles are merciless, and when a dream wants to express the idea that it’s a dog-eat-dog world, it has a reptilian uber predator at its disposal to get across the idea. Also, reptiles are instinctive, and when a dream needs to speak to instincts, especially primitive ones, it has the option of using a dinosaur in the role. A dream may choose a dinosaur as a symbol over other options such as a lizard or snake to say it’s a powerful instinct. Survival is the instinct in question, and you are fighting for your life. The powerful, primitive instinct kicks in, and a dream shows it as a fight for survival against a dinosaur. The imagery visualizes the idea. The dinosaur is a good match as a symbol for the instincts of aggression and temper, and for primitive emotions like fear and anger. Primitive instincts are hard to control, and the same can be said of dinosaurs. To the dream storyteller, the dinosaur is the perfect character to play the role that expresses the idea or ideas.

A symbol is a shorthand way of expressing an idea or set of ideas, so as you analyze a dinosaur as a symbol, you look for the ideas behind it. Oftentimes, they are expressed through dream metaphors. Take for instance the dream a teenager had about hiding from a dinosaur that sniffs around looking for him and his group of friends. One of them makes a noise, and he says shut up or else the dinosaur will find them. The dream is a story about his life while living with his grandpa, the “old dinosaur” with outdated notions and strict standards. He avoids the elder’s scrutiny as best he can, but his friends have a habit of saying things that spark suspicion. It’s a clever use of the metaphor of the ‘old dinosaur’ to tell a story about avoiding grandpa’s unwanted attention.

The idea of “outdated” expands to include old habits and old obstacles. Keep stretching the idea and it can mean that it’s time to put something behind you. A dinosaur is a relic from the distant past, so if a dinosaur chases you in a dream it may symbolize something about your past catching up with you, or something that can’t be escaped or that won’t take no for an answer — it just keeps coming no matter what you say or do.

A dream can refer to the distant past and archaic ideas and notions as dinosaur bones or fossils. Finding dinosaur bones can symbolize discovering something about yourself that relates to your ancestry or heritage. It can symbolize something buried deep in the subconscious mind, such as memories and emotions. It can symbolize a passion for history, or any sort of passion, especially when a person is single-minded in pursuit of it. Dinosaurs aren’t known for their subtlety but are known for their relentlessness.

Don’t forget that dreams use a symbol as part of a story. The story is how dream author defines what it means. Take for example the dream a woman had where she’s stuck in a cave and afraid to leave because dinosaurs roam outside. In that context, the cave is her comfort zone and the dinosaurs symbolize her fear of leaving it. The dream imagery also captures the deeper dynamics of why she stays in her comfort zone; leaving it feels dangerous, like stepping outside where the dinosaurs roam.

This post about dinosaur dreams is taken from content cut from my forthcoming book Nightmares: Your Guide to Interpreting Your Darkest Dreams. Available for pre-order. The book explains in detail how to interpret dreams that feature scary symbols and themes. Unfortunately, we did not have room to include my take on how to interpret the meaning of dinosaurs in dreams.