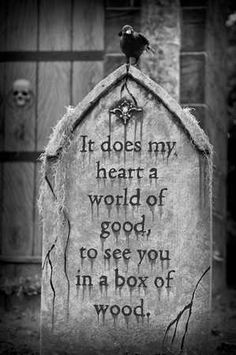 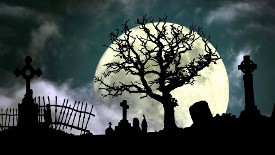 Graveyards are associated with things that come to an end. For example, a relationship ends, or you sense it coming, and dream about a graveyard. Or a phase of life comes to an end. You are maturing, growing, moving on. Perhaps something about yourself is changing and some part of yourself is passing on, a normal part of the maturation process. Death in this sense is figurative, an exaggeration that fits.

While this sort of dream can be distressing, it is essentially positive if you are handling the changes well or are willing to make the effort. If you aren’t handling them well, take a dream like this as a suggestion to let go and move on.

Graveyards are associated with death, and in dreams death can be referred to in the literal sense. Perhaps something happened recently that brought the thought of death to mind, such as the passing of someone you know or a news report about death that affected you.

A more literal interpretation of a graveyard involves fear of death or recognizing it as inevitable. Cemetery dreams are prevalent in older or very ill people for whom death is a very real possibility.

Graveyards can connect with concerns about your health, and with taking risks that put you in danger. There is nothing like the image of going to the grave or seeing your name on a headstone to snap you out of it!

Graveyards are where things are buried, and dreams can use that association to create symbolism for other things that are buried, such as feelings and memories. It can mean you want to forget something. Or, alternately, that you don’t want to forget it! For example, a woman dreams about finding her mother’s grave and frantically digging up her body. The body is preserved and the eyes are open, but she’s lifeless. The dream connects with the woman’s sudden realization that her relationship with her mother is becoming lifeless. She’s been busy and out of touch and it’s taking a toll. Her action of digging up her mother means that she wants to revive the relationship.

Another association with cemeteries is peace. When you are dead you have nothing to worry about. There is hardly a quieter or more peaceful place than a cemetery. It is easy to confuse the longing one feels in a dream featuring a cemetery to be a death wish when really it is a “rest wish.”

A graveyard can symbolize remembrance of a loved one, in which case the dream is likely to include some references to that person.

Dreaming about a graveyard can symbolize things from the past that are gone now, such as hopes you had, relationships that are over, or aspects of yourself which have receded. Think of situations for which the terms “dead and buried” or “lay to rest” are used. The idea can be used expansively.

For example, your favorite television shows come to an end and you feel a real sense of loss.

Parts of yourself can recede back into the unconscious mind but are never fully gone. They are, in a sense, buried by time. A cemetery can symbolize remembering or honoring what got you to this point in your life. For example, the teenager in you gives way for the adult to emerge, or self-doubt gives way to confidence, or a previous job leads to advancement to a new one.

A dream about living in a cemetery or near one, or sleeping on top of a grave, can symbolize dwelling on the past. It implies the need to let go and live in the present.