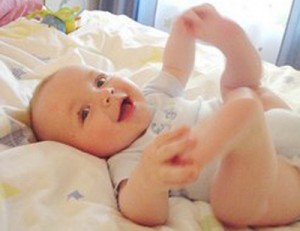 Click to learn more about the meaning of dreams about pregnancy and giving birth.

Children in a dream

In my dreams I have three children ranging in age from infant to a few years old. The oldest, a boy, I don’t really see much of in the dream. There’s also a little girl, a bit pouty and 100% adorable. The third child is a baby boy. I remember playing a game with his toes. He’s a very happy baby, full of laughter and giggles. What does this dream mean?

You actually interpreted this dream. I only helped you think it through. The conclusion is eye-opening, and the more I think about it, the more I feel comfortable with how we interpreted the dream.

At first I was pretty sure the children represent something creative in you — children are creations, and in the dreams of women that’s always a possibility for meaning to consider.

That idea didn’t ring a bell with you, so I suggested that the dream could show aspects of yourself. The children symbolize related ideas such as nurturing, caring, joy. Happy babies in dreams are a classic sign of joy to be alive, of awe and wonder at life. But that didn’t resonate.

We considered the idea of the children representing something new in your life. But no, that’s not it.

We considered the idea of the dream being a simulation that brings out your motherly side. You are not a mother but you want to be. Dreams can help you to explore thoughts and feelings and prepare you for what’s to come in your life. But you are unable to have children, a fact that’s deeply saddening.

We tried out the idea of “inner child.” But you said the children did not feel like they were part of you in that sense; you felt they were your children. I was stumped. Then you came up with the meaning:

They really are your children. You’ve had two miscarriages that you know about, and if the children had been born they would be the ages of the children in the dream. The third child, the girl, is either another miscarriage when you didn’t know for sure you were pregnant, or a child still to come.

I feel for your loss. You would be a great mother.

But in a way, you already are a mother. Those children in your dream are real. Their bodies stopped growing before they were born, but they live on in some place where the idea of them will never die. Dreams can tap us into other realities that are just as “real” as the one we live in.

The little girl is a mystery. She could represent a pregnancy you didn’t know about —  your body has been through big hormonal swings that can make pregnancy tests unreliable. Or she could be a child still to come. I really want to believe that the little girl is in your future.

Dreams are for your benefit, and to see your unborn children in a dream is a way to connect with them, to love them even though they are not physically part of your life. Dreams are known to show you your future, especially some of the very important events like having children. So while it is possible that the little girl symbolizes a pregnancy that miscarried, my sense is your dream showed  you her as a way of giving you hope you will someday hold her in your arms.

This theme of dreaming intensely and realistically about children is widespread. The source of the dreams vary from wish-fulfillment, to planting a seed in the mind of the mother that she wants to have children, to some deep creative process where future children begin as ideas in the minds of the parents.

The world as we know it is created through our observation. Quantum physics shows us that this material reality doesn’t exist in its present form till it a person comes along and chooses among the many possibilities. It’s a mind-blowing concept that has a century of research, observations, and experimentation to affirm it. Perhaps by dreaming so intensely about children that aren’t born, it helps to bring them into this reality from the timeless place where they originate.

Read the next two prime examples: