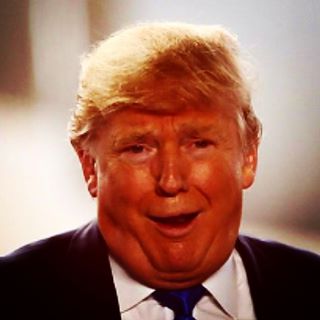 Donald Trump gave me head… in a dream

Donald Trump did what?!?!

Sigmund Freud claimed that the most bizarre dreams are the most revealing of the inner psychological dynamics of the dreamer. It’s true most of the time, in my experience as a dream interpreter. Bizarre, challenging dreams are also some of the best learning tools because if you find the meaning in them, you can learn to find it in more ordinary dreams, too.

Which leads us to one of the most bizarre and challenging dreams I’ve encountered. The real shocker comes at the end so expect a lot of buildup before you get to the best part. The description is edited but left mostly intact so you get the full impact.

[In my dream] my friends and I sit down at a restaurant and order some food. I am starving and really wanting my country fried steak with mashed potatoes. The waiter—a built man in his 30s—brings out our food but then, for whatever reason, informs me that I need to pay for my meal now via an iPad-like device that requires answering 20 complicated questions. I say, “Okay, I will simply eat my steak and then I’ll happily pay.”

I go to take a bite of my steak and he pushes it back and places his arms like seat belt straps on both sides of my chair so I can’t move. I become, understandably, irate—but my friends encourage me to just get it over with. I struggle against the man’s arms and finally begin the complex iPad questionnaire.

I’m angry and shaking with hunger and finding it impossible to complete this questionnaire. The waiter-man persists, after 15-or-so minutes I am done. When I go to eat my steak—it’s cold! I ask the waiter if he can reheat it for me and he gives an unequivocal no. So I get my ass up and wander around the now-huge restaurant trying to find another waiter or chef who can help me. Everyone refuses. I rant about how awful this restaurant is, how no one should ever be treated this way. 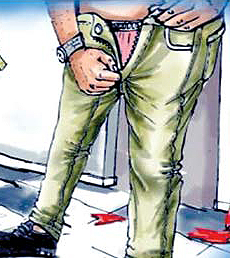 You know what comes next.

Then I see the very friendly manager and I tell him what just happened. He smiles and asks me to come with him through the employee-only door. I’m happy my problem is finally resolved, but then I see that we’re walking back to the parking lot behind the restaurant. I feel a little nervous. He asks me to get into the back seat of his car. Now I feel real nervous.

I sit down and he begins to unzip my pants, somehow able to squat in front of me. Then, out of nowhere, he’s Donald Trump. Disgusting, scowling, flat-headed Donald Trump. And he starts giving me head.

The weird part is, he likes to suck just the very top of my thing really hard. He is sweaty, creepy and making loud suction noises. In the end, I decide to just focus and get it over with and try to concentrate on finishing.

But I wake up before I finish. Probably the only time in history that’s a good thing.

This is not some liberal ploy or meta-statement, this actually just happened 20 minutes ago.

So, to recap, the dreamer goes to a restaurant to enjoy a big, satisfying meal and ends up getting bad head from Donald Trump. The symbolic meaning of the dream is summarized in that sentence, but first let’s take it from the top and look at piece by piece. Then I’ll reveal to you what the dreamer told me that puts everything in perspective. It’s worth the wait to find out.

The dream story opens with the dreamer going to a restaurant with friends and ordering a big steak. But he’s told to pay before he can eat, and forced to fill out a questionnaire.

The personal context of his recent life provides the clues to decode this symbolism. Recently, after much preparation and effort, he left behind small-town life and moved to a big city, a dream come true. The satisfaction he expects from his accomplishment is like the big steak. But before he can enjoy it, he has to deal with the reality of his situation, symbolized in the dream as paying ahead of time and filling out the questionnaire. In the material sense, he paid for his big move in the form of moving costs, and he filled out forms for leasing, employment, banking and all that. A lot of paperwork. Tediously answering questions. Meanwhile, he’s still waiting for the satisfaction and enjoyment he expects. 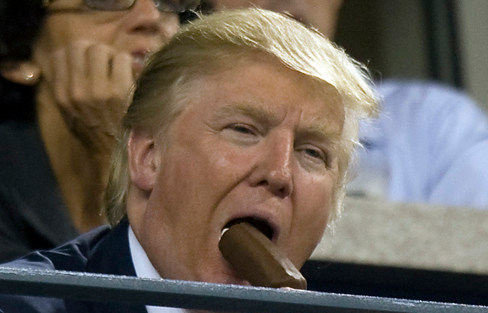 Found this pic and couldn’t resist.

But wait, the complications grow deeper.

He moved in with someone he didn’t know and soon found out his new roommate meets straight guys through personals ads and dating apps and sucks them off. It’s a twisted “head game” and the dreamer is caught up in it because his roommate brings his work home with him and the dreamer witnesses some of it. Think back on his dream and the scene where the manager takes him to the car, morphs into a sweaty, scowling Trump and gives him bad head. Do you see the parallels?

The cold steak symbolically sums up his feeling of deep dissatisfaction with the situation. What’s more disappointing than a cold steak in a nice restaurant? He feels wronged, depicted in the dream when he goes looking for help  and finds the manager. He is supposed to be living his dream but it’s turning into a nightmare as reality sinks in.

Ask yourself, who’s managing the situation? That’s how we decode the meaning of the manager dream character. You could say the roommate is the manager because the apartment is his, but the guy who had the dream really needs to recognize his responsibility for the predicament, too.

The scene in the car ties it all together and paints a picture.  The dream chooses Donald Trump to play the role because to the dreamer, Trump is just about the most repulsive person he can imagine. Plus, Trump’s “let’s a make a deal” reputation ties in with the deal the dreamer presumably made when he moved in. Just about everyone who deals with Trump ends up screwed in the end. Again, do you see the parallels between dream and reality?

I’m RadOwl, the redditor who took first crack at interpreting this dream.

The rough and nasty way the Trump dream character gives head is probably an accurate depiction of the reality the dreamer finds himself in with his roommate. Hooking up and giving blow jobs to random guys is not about pleasure and enjoyment. It’s about controlling and manhandling other men and even taunting them by giving them something they want but not the way they want it.

And the dreamer’s reaction of just giving in and wanting to finish symbolizes trying to get what he came to the city for. But he can’t get no satisfaction. The dream perfectly sums up the situation in that scene and refers back to the scene with the cold steak. Once again, something that’s supposed to be enjoyable for the dreamer leaves him coldly disappointed.

When the manager transforms into Trump it’s a clear indication that, in this story, they are one in the same. I call this storytelling device “split personality” and teach how it works, at Dream School.

With brevity, poignancy and humor, the dream tells a story about a complicated situation. Imagine if the guy who dreamed that Trump gave him head was asked by an old friend to describe how his big move to the city is working out. He could simply recount the dream and it says it all, in a way that taps into the hidden dynamics and the dreamer’s thoughts, feelings, and perceptions.

Dr. Freud, you’re correct. The most bizarre and shocking dreams really can be the most revealing.