You Are Here Dreams 1-2-3 » Dream Topics » The Trump Invasian: Donald in Our Dreams 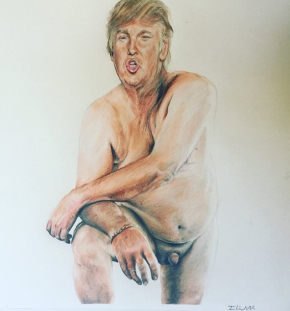 Talk about nightmare fuel! This picture is said to give people nightmares.

Donald Trump has officially invaded our collective psyche, judging by the spike in dreams where he features as a main character. The Donald has long been a notable and notorious public figure and a character in dreams. But now that he’s within walking distance of inhabiting the White House, people are dreaming about him a lot more—in hilarious, telling, and sometimes scary ways.

He’s becoming a popular topic in therapists’ offices, too. 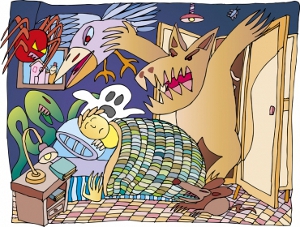 What, he won the election? I thought it was just a bad dream.

I first noticed the trend in December 2015 when Trump started being taken more seriously as a candidate who could win the Republican nomination, instead of a sideshow act. December is also when families get together for the holidays and talk politics, and of course those experiences and conversations can be fodder for dreams. I’m RadOwl, a moderator at Reddit Dreams where a constant stream of dream reports cross before my eyes. I get a good read on the collective psyche, and around the holidays I noticed Trump’s name popping up more often in dreams. Here is a typical example [all examples are edited for brevity and clarity]:

In my dream, Donald Trump is coming over to visit. He arrives with a couple of bodyguards and some of his “people.” Before I know it he is drunk and getting into a heated argument with my uncle—who is a big Trump supporter—about politics and immigrants and wars in the Middle East. The three of us end up fist-fighting. Trump breaks a bunch of furniture, climbing up onto tables and jumping down to break them in half, smashing chairs, and ripping apart couch cushions. I am shocked but somehow not surprised. When I ask his bodyguard what his problem is, he tells me, “Oh don’t worry, he does this all the time.”

What a picture this description paints! Can you imagine Trump throwing haymakers and smashing furniture like Hulk Hogan? 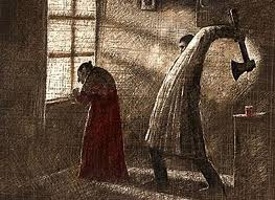 Guess who’s coming over for the holidays?

The dream stems from an incident during the holidays when the dreamer’s uncle came over, got drunk, and mucked up a nice family outing by spouting angry “Trump-ian” rhetoric. The dream is a dramatization of the incident. Fist-fighting and trashing the house are exaggerated representations of the uncle’s actions. Emotionally and psychologically, the uncle trashed the dreamer’s home and disrespected the occasion. Trump and the uncle are shown as two characters but really they are one and the same.

And the bodyguard’s statement that “he does this all the time” rings true, too. The uncle makes a habit of getting drunk and angry and ruining holiday occasions.

World events affect dreams same as politics. Back when the situation in Syria looked to be headed toward Armageddon, Reddit Dreams experienced a spike in dreams about WWIII. When Putin ordered the annexation of Crimea and got lashed by Western media, a popular dream theme was Russia invading the US and Europe. And now that the American political season is in full swing, dreams featuring Trump and the cast of related characters such as “Uncle Bernie” and “Madame Hillary” are popping up all over.

[I don’t recall Rubio or Cruz featured in many dreams, perhaps because neither of them make a strong impression.]

Trump is a rich tapestry on which to paint a story—and dreams really do “paint” a story using imagery. Bombastic, greedy, cocky, heartless, arrogant—any of these impressions of the man can be used as colors on the dream easel. Plus: successful, big business, scrappy, father figure. I’ve seen many uses of The Donald as symbolism in dreams.

But wait, it gets better … or worse, depending on how you view it

Dreams weave together personal impressions with current events to create symbolism. Take a look at this example of how a dream processes impressions of Trump. I suggest that you skip ahead if you don’t want the image of baby sacrifice in your head:

Had a dream last night that me and someone else break into a old, creepy-looking warehouse. Hearing screams and other sickening noises, we walk around to find the source. In a dimly lit area, standing alongside an animal pen, there he stands … Donald Trump. Inside the animal pen are Fallout 4-size mole rats in all their over-sized, irradiated viciousness. 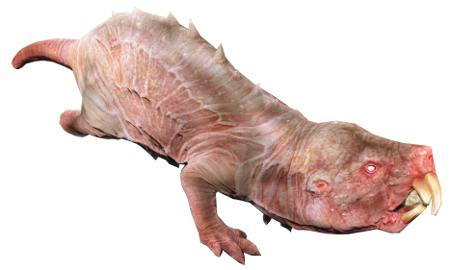 That’s what the dreamer saw. Isn’t it beautiful?

Next thing I know he motions some henchmen over and they throw two small Mexican children into the pen to be ripped apart. As the children are being eaten, Trump is yelling something about “anchor babies” and how if he can’t build a wall he will use these animals to hunt down and kill illegal immigrants along the Mexican border. Apparently it’s going to be ‘uge. About that time we knock something over and all eyes are on us. Epic mole rat chase ensues. 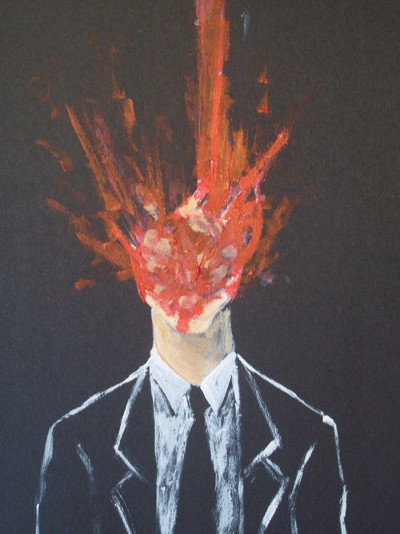 Graphic depiction of what happens to my head as I read some of these dream descriptions.

It’s easy to see how news about Trump’s low opinion of Mexicans worked into this dream. If you are a big fan of his, you probably object to this dream’s portrayal of him as a heartless bastard who feeds Mexican babies to mutant rats. But in dreamland, it’s fair game.

If you really listen to the rhetoric about Trump, especially the comparisons to Nazis and Hitler, the dream’s portrayal accurately reflects what’s being tossed about in “oh my god, it’s the apocalypse if Trump wins!” circles. Trump scares the shit out of some people. To them he’s a bogeyman. Talk about nightmare-fuel!

So two of my friends and I decide to go to Mexico for Spring Break, and just as we cross [the border back into the US], some Mexican dudes ask us for a ride. Of course we say yes. Just as we’re trying to fit everyone into the minivan, the cops spot us and start chasing us down and we speed off in GTA-like fashion. It gets intense and shit goes down like crazy. We do evasive maneuvers and watch cop cars crash into one another, bullets fly, and we somehow get away by pulling into a 7-11.

While we’re about to go inside to get Arizona Iced Teas, what do you know, Donald fuckin’ Trump comes out and asks us for a ride to his house. We can’t say no. So the Mexicans have to hide in the car somewhere. My two other friends are stuck trying to tuck them away somewhere in the car and I’m on diversion/stalling duty to keep Trump from getting in the car. Nonetheless, he manages to get by me. We’re terrified he’ll see [the Mexicans] but when he opens the door, they’re not there. And when he opens the trunk, they’re not there either. They had found a way to hang onto the underbelly of the minivan, luckily.

So we drive off and drop Trump off at his home. Just as he is about to open his front door, one of the Mexicans says “fuck you.” And immediately, Trump calls in a military raid against us and we (somehow) go apeshit on the entire US Border Patrol. 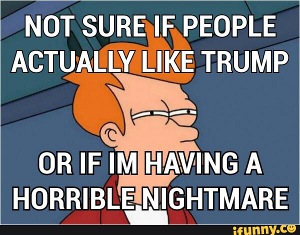 Hilarious! Can you guess what impressions and associations the person has that the dream uses to create this story? My guess is, in certain company—namely, around Trump supporters—the dreamer hides his true feeling about Mexicans. They’re cool in his book, but he knows better than to say that too loudly.

[I live in Tucson and have witnessed tirades against Mexicans and “speak fuckin’ English why don’t ya” comments. It’s sometimes better to just let these situation defuse themselves. People got big guns around here.]

Other impressions and facts about Trump are used to create dream symbolism, too. Such as in a dream a young female had about choosing Trump as her new gynecologist and going to his estate for her appointment. She gets lost along the way and scared he’ll be angry because she’s late. The sun dazzles her eyes. When she finally arrives he agrees that they can skip the physical exam. The dream ends with her wondering how she’s going to pay for the appointment, thinking that going to such a powerful man will have a high price.

If you’re female, I don’t think you’d want this guy poking around in there, either.

The meaning of that dream is a heckuva mystery to solve. We began analyzing it by considering the dreamer’s relationship with a powerful man she knows. I thought it was possible that Trump is used as a surrogate dream character for the man, and the rest of the story can be understood as a metaphor for the relationship. Perhaps she wonders if it can remain platonic, or if the “price” of being involved with a powerful man will mean at some point he will demand sex (symbolized in the dream as a physical exam). The sun can symbolize powerful masculinity, so the part about the sun almost blinding her could be a metaphor for being dazzled by the man’s power and persona.

Zeroing In on the Correct Interpretation

However, after discussing these possibilities with her we came up with another way of looking at the symbolism of Trump as her gynecologist: It’s a metaphor for trusting her health care to corporate behemoths that are only in the business to make a buck. Considering her family history of gynecological disease, she could end up paying with her life if she doesn’t get the care she needs, which includes sometimes costly physical exams. Oh, and guess who just took over as provider of her health care? A corporate behemoth.

See how everything in the dream connects together? Trump is her new gynecologist because he represents Big Business and her healthcare is now in the hands of Big Business. The Trump character says let’s skip the physical exam, an action in the dream that reflects the dreamer’s fear.

The dreamer also sees the possibility that the dream reflects her opinion of Trump not giving a rat’s ass about people, and his avid followers being scary as hell. She’s dazzled by Trump’s power and craves having her own power to influence people and society in good ways. Under this interpretation, her thoughts about the high price of her appointment with him reflect fears about the high price the country could pay if he’s elected — and is already paying by seriously considering a demagogue as president.

In another dream posted to Reddit Dreams, Trump’s son in a boxing match is used to tell a story about the dreamer sticking up for himself. He sees how Trump stands up for himself, and like a son emulating his father he learns from that example.

Then there’s the dream that takes place in Trump’s Chili Emporium and the dreamer sees the man himself alongside “little” Marco Rubio putting laxative in the chili . Seriously, you can’t make this stuff up.

I don’t know what The Donald would think about the way he is portrayed in dreams, but if this trend continues I might be the one who ends up talking about him in a therapist’s office!

And please remember, this dream analysis is not a political statement, just a report from Dreamland from someone who goes there often.

5 thoughts on “The Trump Invasian: Donald in Our Dreams”