You Are Here Dreams 1-2-3 » Interpret Dreams » Dream about leg amputated – What does it mean?

Dream about leg amputated – What does it mean?

Dream about leg amputated voluntarily – What does it mean?

Dreams use parts of the body as symbolism, and lately legs have been mentioned in dreams shared at Reddit Dreams where I’m a moderator. Take this one for example (original post at Reddit):

In the dream I am planning on having my leg amputated.

The guy goes on to say he is overweight and has a history of diabetes. He’s taking two college classes and failing one of them — anatomy — that he needs to get through nursing school. On top of that, he’s considering a change of schools and it will mean his wife supports them till he graduates and gets a job. 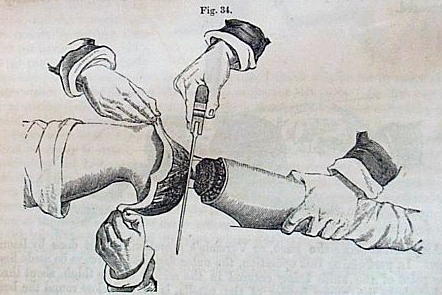 In this dream, leg amputation is symbolism.

Those details give me a few directions to go in. Is it a health warning dream, a way of saying if the dreamer continues on his present course, overweight and diabetic, he might as well cut off his leg? Untreated diabetes can lead to amputations, and the fear of it could be in the back of his mind. Is it a warning to not put too much burden on his wife, who will have to carry the load, or a way saying “legs cut out from beneath you?” That’s getting warmer.

To figure out the meaning of the dream, ask yourself what legs do. Legs take us places. They make us move, and in dreams movement is often connected with movement in a person’s life. Through our conversation on Reddit I found out the dreamer planned to drop his anatomy class that day. In a way, he’s cutting one of his legs off. It’s a setback that will hamper his ability to move his life forward.

The part of the dream that stood out to me is he voluntarily decides to amputate his leg. It’s something that would usually jar a person back to reality, but when it’s dream symbolism we tend to play along because we know subconsciously things are not what they appear.

The dreamer agreed with the interpretation and added that in the class he was dropping, he had a test that day on, of all subjects, leg anatomy.

In another dream with leg symbolism, the dreamer is with two friends driving Lamborghinis. One friend decides to take it to the next level and long board. He crashes and badly wounds his leg. He acts like it’s no big deal, happens all the time. At the hospital he cuts off pieces of his leg, puts them in bags of popcorn and passes them around.

Sounds like some crazy shit, but it’s all understandable as symbolism. Driving around in overcharged sports cars can be a way of symbolizing that the dreamer and his friends are daredevils always seeking the next adventure. The friend who injures himself takes it too far, from the dreamer’s perspective. I used an example of someone who takes mad amounts of pills and pretends like it’s all good. It’s not, but you pretend. The guy who had the dream said it wasn’t pills but something similar.

Another clue is in how the friend passes around pieces of his leg. It’s a way of saying he shares his misery or bad habits. Knowing that the dreamer is in high school and remembering what my friends and I were like at that age, I could picture the scene. Turns out I hit the interpretation on the head.