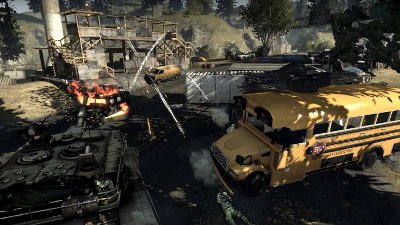 Dreams exaggerate. They take something going on in your life or in yourself and blow it way out of proportion. They do this to get your attention and be memorable. You can have as many as 20 dreams in a night, and among all that content the few dreams that are the most important need to stand out. Many dreams simply process memories of the day and don’t really have anything to teach you, nor important meaning. Some are very important, very meaningful, and have much to teach you.

The dream about an apocalyptic battle I’m about to analyze is a great example of exaggeration to get a point across. It was shared at Reddit Dreams, where I’m a moderator.

(Link to original. I’m “RadOwl” in that discussion. I changed the dream description to present tense and lightly edited it.)

In my dream, I travel just about as far forward in time as it is possible to go, which is actually so far that time somehow loops over and takes me back to the very beginning of time, where the world is jagged, rocky, and constantly blanketed by a thick, silvery mist. There, the last remnants of humanity — super-soldiers augmented with cybernetic parts to enhance their combat prowess — are fighting an endless battle against an invading enemy force: strange, mantis-like humanoids that seem to be swarming en masse from the center of the earth, intent on eliminating the very last human settlement in history. 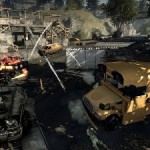 dream interpretation about an apocalyptic battle

Somehow, after briefly observing the battle, I know that things are going even worse than usual for humanity, so I go inside and voice my concerns to the person in charge — a tough-as-nails black woman in her mid-fifties — who then goes outside and fires the general overseeing the battle.

After that, I am back in the base for some reason, and I am being given a tour that showcases all the futuristic weapons and equipment that the soldiers are fighting with. The one that stands out the most for me is a sort of foldable APC: light as a feather but tough as a tank, it is made out of a material that looks like plastic but can withstand just about anything, and the whole thing can be collapsed like a tent and carried around by hand.

Wow, this dream has it all: time travel; battles to save humanity; futuristic technology; interpersonal drama; powerful alien enemies. It’s like an episode of Battlestar Galactica or something.

To interpret it, I began with the idea of battling something, because that’s the main theme of the dream. The other main idea that clued me in is the part about time travel, reaching the end only to go back to the beginning. The picture I got in my mind reminded me of people I know who work in high-pressure environments. They finish some huge project only to find another one waiting for them. They have a constant sense of alarm as they race to meet deadlines and stay on top of a tidal wave of work.

Specifically, I thought of someone I know who works for a major video gaming company. The team he is on work really hard and fast to produce a game, then work even harder and faster as the game is getting ready to launch. They sometimes eat and sleep at work. They do all that frantic work, finish the project, only to turn around and have a new project waiting for them. Rarely do they get a chance to take a breather.

I told the dreamer about the thoughts her dream sparked in me, and she related. She works in the front office at a private school and says there is always something that has to be done right now. The panic button is always being pushed. The work is endless. One project is finished and another immediately begins.

So with that in mind, take a look again at the dream’s description. The super-soldiers augmented with high technology are an exaggerated representation of the modern office worker armed with powerful computers and smart phones. The dreamer and her workmates are like soldiers fighting battles against on onslaught of work and responsibilities. The weapons the soldiers fight with represent the tools the dreamer uses to do her job. The mantis-like creatures are the impersonal forces she and her workmates face everyday in their work. If they fail to win the battle, they could end up harming the organization or losing their jobs.

To understand what the APC represents, the keyword is personnel. What is something high-tech that helps manage personnel? Sounds like a smart phone to me.

I thought at first that the black-lady leader and the general could represent someone getting fired at her workplace, but then with more thought about what a general does, I realized that this detail could be related to delegating work responsibilities. Generals lead. They also delegate. The black lady could represent a part of the dreamer that wants to be tough-as-nails when it comes to delegating responsibility and work load.

So as you can see, everything in this dream relates back to the dreamer’s work life. The dream could easily be confused for some sort of apocalypse in the dreamer’s life, but instead it’s an exaggerated representation of the apocalyptic battles she fights at work every day. She says she loves her job so leaving it is not an option. It might be a good idea though to take a breather and delegate more responsible.