You Are Here Dreams 1-2-3 » Dream Topics » Shadow Dreams: Everyone Has a Dark Side | Carl Jung

Shadow Dreams: Everyone Has a Dark Side | Carl Jung 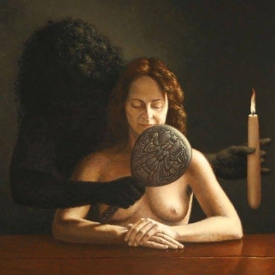 Shadow in a dream can represent something unknown or unseen about yourself. It’s a personal blind spot. Dr. Carl Jung calls it “Shadow.” It’s the dark side of the ego, and it usually shows itself in dreams as a shadowy character.

Shadow can symbolize fear. A shadow may represent an intangible fear such as fear of the dark, or a specific fear such as a person or aspect of your personality. From the time we are very young we are taught to fear the dark. Your dreaming mind uses those associations to create symbolism.

Shadow can symbolize danger. Your feelings are your best guide because you react while dreaming based on subconscious knowledge of what everything really means. If you react by fearing a shadow in a dream or sensing danger, it’s a clue to what the shadow symbolizes: something that you fear or that presents a danger.

A shadow in a dream can symbolize living in the shadow of another person such as a parent, sibling, or authority figure. The same dream imagery can also mean that there’s something about you that’s blocking the light of your personal awareness. You are your own obstacle.

Jung’s Definition | Shadow of the Ego

Shadow is a term Swiss psychiatrist Dr. Carl Jung uses to describe the dark side of the ego, in which case it is usually capitalized to avoid confusion with shadow meaning “a dark area or shape.”

The ego straddles the line between the conscious and unconscious sides of the mind. The more conscious the ego, the more the line marking the boundary of the conscious mind moves into Shadow’s territory. You could say that the person is “enlightened.”

Think of it like phases of the moon. A person who is highly conscious is like a full moon with no dark or shadowy areas. A person with no self-awareness is like a new moon, covered in shadow. [Note: Phases of the moon are not caused by the Earth’s shadow, but I use it as an analogy.] Collectively, we live in an age when the average level of consciousness is just a sliver, a crescent moon. The ego is mostly in the dark and people are mostly driven by unconscious thoughts, motives, and desires.

Shadow Competes for Control of the Psyche

The ego is the CEO of the psyche, and the psyche is made of structures that interact together. It’s a collective. But imagine that some or all employees (structures of the psyche) decide to follow a different leader, seduced over to the “Dark Side.” They rebel against the ego, led by one particularly powerful character: Shadow.

The Star Wars mythology perfectly captures this idea because The Dark Lord, Emperor Palpatine, is amid the good guys the whole time, secretly scheming and dividing them against each other, creating a void he fills to become supreme ruler. Dictator. And like in Star Wars, when Shadow rules the psyche, the entire galaxy (person) lives in turmoil and pain.

George Lucas is a clever storyteller! In Star Wars, he created the myth that captures the dynamics of the times in which we live.

Dr. Jung says enlightenment is found by exploring the dark areas within oneself. His student Robert Johnson went on to write a book titled Owning Your Own Shadow, and it’s highly recommended. I also recommend Scott Jeffrey’s teachings about shadow.

The bigger the ego, the bigger its Shadow

A strong ego is necessary to strive for what you want in this world, but the strong ego that only serves itself is Shadow personified. It’s dangerous to itself, to others, and to humanity.

The key to dealing with Shadow is to align your ego with something greater than itself. And it better be genuinely greater, or Shadow will work from the back of your mind to mercilessly tear it down.

Behaviors and Attitudes of Shadow

When you do something out of character, especially something that works against the agenda of your ego, you can bet that Shadow is at work behind the scenes. Shadow is known as the Trickster because it’s slippery and misleading. It gets you to work against yourself.

For example, you forget about an important appointment but didn’t really want to go, anyway. Or, you inexplicably fall sick before a test or big meeting for which you’re unprepared. Or, you get into a car accident on a day when you really don’t want to go to work. Shadow tricks you into acting from your true feelings, but it only has that power if you give it.

Haha, joke’s on you.

Shadow is why people sabotage their carefully constructed lives, go against their best intentions, or do the wrong thing despite knowing better. Shadow is a rebel, and it steps in when you don’t have the guts to do something yourself.

It brings to light everything you don’t want to know about yourself and uses it to divide the psyche.

Where there is division in the psyche, Shadow grows.

You fight back by accepting and embracing it all. And by thanking your Shadow for making you aware of it.

It’s doing you a HUGE favor.

Obviously, Shadow can be personally dangerous, especially when it’s totally out of control and influences people and events against you. But the danger is compounded because your personal Shadow connects with the collective Shadow, what we call evil. Shadow is the mechanism for evil to infiltrate the psyche.

It’s all too easy to project your Shadow onto other people and hate them for it. And when that happens on a mass scale it leads to horrible tragedies and abuses such as the Holocaust, slavery, the Killing Fields of Cambodia, and the US invasion of Iraq. Know your own Shadow and own it, or it will own you.

Shadow’s Not All Bad

Shadow is the gateway to the unconscious mind and a tremendous source of creativity. It prepares you for a deeper relationship with your unconscious—a relationship that potentially leads to an inner marriage with your anima or animus, Greek words meaning “soul” (just be careful with that term; think of it simply as “the deepest, inner You“). Alchemists call it “marriage of the soul,” and a point of alchemy is to transform ordinary consciousness (lead) into extraordinary consciousness (gold).

Shadow is not bad by nature. In fact, it’s necessary. Nature created it as part of the self-regulating psyche—as a guardian to protect you from accessing soul before you’re ready and mucking everything up. It protects the beauty and purity within  you.

Think of Shadow as the person who stands up when the minister asks whether anyone objects to this marriage and says, “Yeah, I do. That fool ain’t ready.”

Shadow is your worst enemy until you come to terms with it and make it respect you. Then it’s your best ally. It watches your back and perceptively picks up on motives and secrets. The connection Shadow has to your unconscious mind and the collective Shadow can be extremely valuable. It’ll save your ass!

And not only that, it guides you toward wholeness and your deepest creative forces.

Shadow manifests in dreams as a dark or shifty character, usually a human character with dark skin and dressed in dark clothing, though it can take the form of an animal, monster, invisible presence, and similar imagery. Its face can be blurred or distinct; however, a blurred face of a dark dream character is a hallmark of Shadow because it’s a great metaphor for something missing in your self-awareness. As you get to know your Shadow it’ll take on more distinct form in your dreams and visions that returns time and again to test and prod and warn and guide you.

A common report in the early stages of dream work is of a dark character that insistently pursues and confronts the dreamer. If the person bravely accepts everything their dreams show them with the intent of making it conscious, they eventually dream about seeing the face of their nemesis. And it is themselves.

Shadow can take the form of any racial or ethnic group or subgroup: Hispanic, Asian, Italian, Gypsy, Latino, Polish, Russian—any group viewed as threatening or discriminated against.

Shadow’s depiction as a particular race or ethnicity is based on stereotypes, fears, and perceptions, not on objective reality. Racial and ethnic stereotypes are deeply embedded in most cultures and closely connected with Shadow. It doesn’t matter how enlightened you are, your dreaming mind can draw on these associations to create symbolism to represent your Shadow.

Shadow is the dream character that helps you work against your interests. It convinces you something’s OK when it’s really not. It seduces you into doing the wrong thing. It’s the snake in the Garden of Eden that tells you to go ahead and eat the apple. It’s the image in the mirror that points back at you when you wrongly try to blame someone else, and the part of yourself lurking behind the façade, just waiting to burst your bubble.

The shadow is a moral problem that challenges the whole ego-personality, for no one can become conscious of the shadow without considerable moral effort. To become conscious of it involves recognizing the dark aspects of the personality as present and real. This act is the essential condition for any kind of self-knowledge.

6 thoughts on “Shadow Dreams: Everyone Has a Dark Side | Carl Jung”